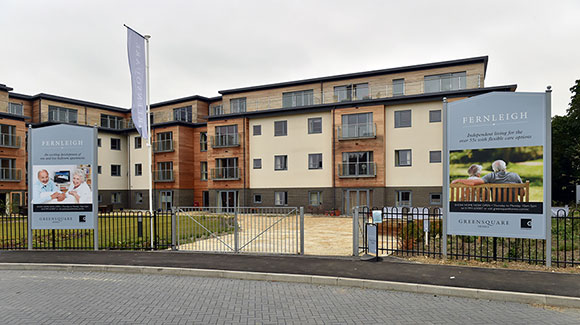 GreenSquare celebrated the official opening of Fernleigh, its new landmark extra care housing development comprising 80 luxury homes in Witney, with an event for residents and friends, local councillors, and staff involved with the project.

Fernleigh, located off Station Road, is the first of the its kind in the area and offers independent living for the over-55s with flexible care options. The development’s 80 modern and luxurious one-bedroom and two-bedroom apartments are a mix of homes for shared ownership, rent, and sale.

Its facilities include a comfortable lounge; fully-equipped restaurant, known as The Limes; therapy room; cinema room; and hairdressers – as well as staff and consultation facilities. Residents can take part in organised activities, such as a light exercise class, organised by the on-site activities coordinator.

At the event, the Chair of GreenSquare’s Board, Hilary Gardner, unveiled a new plaque on the side of the building and presented a croquet set to residents to mark the official opening of the development.

Visitors were given a glimpse of what’s on offer for residents who live in the state-of-the-art scheme, and tried their hand a selection of activities including bocce, new age kurling, and massage sessions. Guests were also treated to a performance by a ‘speech choir’ of residents.

Some residents had earlier brought along a selection of home baked items to take part in a ‘bake off’ competition; this was judged by Hilary Gardner – along with GreenSquare’s chief executive and the The Limes’ chef – and Fernleigh resident Trevor Jackson was announced the winner for his fruit loaf. “It was a unanimous decision!” said Hilary.

Hilary said: “This development is really impressive – and, most importantly of all, the residents I have spoken to today have all said they love their homes.

“Research has shown that we need to face up to the needs of an increasingly ageing population. So building new properties like the ones here at Fernleigh, which have been specifically designed to meet the needs of older people, has never been more essential.”

Hilary said the development had been delivered with strong support from both Oxfordshire County Council and West Oxfordshire District Council; and that the Homes and Communities Agency had invested nearly £3m in GreenSquare’s extra care developments at Fernleigh and a further scheme in Milton-under-Wychwood due to have its official opening next month.

Mike Docker, who has moved into an apartment at Fernleigh with his wife Sandie, said: “When friends come to visit they say it’s like you’re living in a top hotel – and it is! There’s such a nice atmosphere here and everyone gets on so well; moving here is the best thing we ever did.”.

You can find out more about which cookies we are using or switch them off in settings.

This website uses cookies so that we can provide you with the best user experience possible. Cookie information is stored in your browser and performs functions such as recognising you when you return to our website and helping our team to understand which sections of the website you find most interesting and useful.

Strictly Necessary Cookie should be enabled at all times so that we can save your preferences for cookie settings.

If you disable this cookie, we will not be able to save your preferences. This means that every time you visit this website you will need to enable or disable cookies again.

This website uses Google Analytics to collect anonymous information such as the number of visitors to the site, and the most popular pages.

Please enable Strictly Necessary Cookies first so that we can save your preferences!