New homes and on track in Cowley 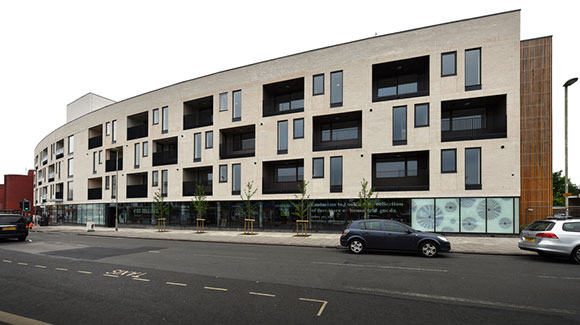 GreenSquare Group started on site at the development on Barns Road in September 2014, which will deliver 40 one- and two-bedroom apartments – for shared ownership and outright sale – as well as community rooms for the area incorporated on the ground floor.

The project will also see the relocation of a furniture recycling store operated by homelessness charity Emmaus from its current base at Westlands Drive, Northway to new premises with a highly visible shop front on Barns Road.

Corrina Johnson, Development Project Manager at GreenSquare, said: “It’s been a busy few months on site and a lot has happened since work began last year. The building’s foundations were completed before Christmas by our contractor Feltham Construction and work on the main structure is progressing to roof level. At the moment, the team is building the internal walls on the ground floor, which gives us a better idea of how the final layout inside will look and means we can view the area that’ll become the community rooms.

“The development will also include a community garden and roof garden for residents, which is scheduled to be completed during the final phase of the project. We are aiming to have the work finished by the end of this year.”

Representatives from the partners involved with the project, including Emmaus, Oxford City Council, Oxfordshire County Council, and the Ark T Centre joined GreenSquare staff on site recently to have a look at the progress.

David Edwards, Executive Director for City Regeneration and Housing at Oxford City Council said: “I’m delighted that work is progressing on the Barns Road site and bringing closer the delivery of new affordable and market-rate homes and community facilities. This development is part of the Council’s approach to promote housing development within the city’s boundaries wherever possible, and to use our planning policies to encourage developers to provide affordable housing.”

Eddie Blaze, Emmaus Oxford General Manager, visited the site and was given the chance to look at the space earmarked to become their shop’s new premises. He said “We’re very excited about the new premises. Not only will it be a brand new, bigger purpose-built retail space, but we will have more room behind the scenes to process and repair donated furniture and household goods.

“It will provide greater opportunities for the people who live at Emmaus Oxford to gain new skills and we will continue to provide amazing bargains like those at our existing Second-Hand Superstore on Westlands Drive, Northway.”

You can find out more about which cookies we are using or switch them off in settings.

This website uses cookies so that we can provide you with the best user experience possible. Cookie information is stored in your browser and performs functions such as recognising you when you return to our website and helping our team to understand which sections of the website you find most interesting and useful.

Strictly Necessary Cookie should be enabled at all times so that we can save your preferences for cookie settings.

If you disable this cookie, we will not be able to save your preferences. This means that every time you visit this website you will need to enable or disable cookies again.

This website uses Google Analytics to collect anonymous information such as the number of visitors to the site, and the most popular pages.

Please enable Strictly Necessary Cookies first so that we can save your preferences!